SRE vs. DevOps: What’s the Difference Between Them? 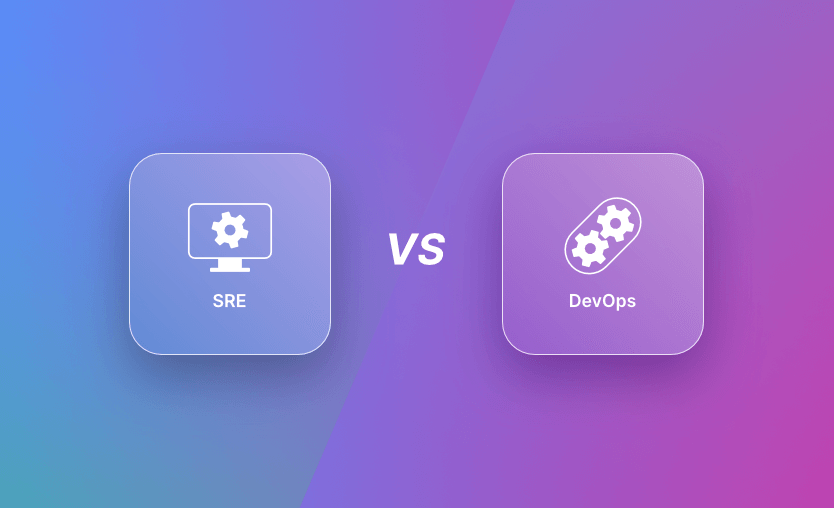 DevOps is a set of practices where development, IT operations, quality, and security are glued to Continuous Integration/Continuous Delivery (CI/CD) to deliver a reliable product to end customers. DevOps culture facilitates the collaboration of the Core Development and Operation team, allowing companies to reduce organization silos, expect and handle failure as part of the process, implement gradual changes, leverage automation tools, and at last, measure everything.

Whereas Site Reliability Engineering (SRE) is responsible for implementing the product developed by the Core Development team. The key objective of the SREs is to implement and automate DevOps practices to reduce the level of incidents and improve reliability and scalability. SREs are also responsible for sending swift and constant feedback to the Development team based on performance metrics – availability, latency, efficiency, capacity, and incident.

Differences Between DevOps and SREs

While DevOps is all about what aspect of the matters, SRE talks about the how part of it all. Nevertheless, there are a few other differences between the two.

Difference in Job Roles of SRE and DevOps

Although there is some overlap in the job roles of SREs and DevOps, there is wide segregation of functions:

Implementing the DevOps practices can reduce the friction between Development and Operations teams. It can also help you deliver the end product reliably along with other challenges and problems that the DevOps teams can solve.

1. Reduced Cost of Development and Maintenance

A DevOps team always works towards CI/CD, putting more effort into automated testing rather than manual testing and improving release management by automating it all.

As for the traditional Software Development Life Cycle, there is always toil on the effort (development, testing, release), which increases the overall cost for the product development and production maintenance. Putting DevOps practice in execution can significantly reduce the delivery time, development, and maintenance costs.

As opposed to the traditional release cycles, where the focus is on getting everything delivered in one release, which increases the risk of failure in production and is much harder to roll back. If DevOps practices are followed strictly, the organization will always have a proper release version system with release versions and minimal manual interventions with the release artifacts.

Here are the gains of a shorter release cycle:

In contrast to the traditional development cycle, where the testing team has to wait for the delivery of the product in the test environment to begin the testing DevOps, testing is injected from the beginning of the development lifecycle.

DevOps facilitates continuous and automated testing with the help of the CI/CD tool (Jenkins) and version control (Git, BitBucket). Adequate coverage of functional, nonfunctional, and interaction tests running in the pipelines can significantly improve the testing automation aspects of the project.

To learn more about DevOps, see our article on Who is DevOps?

SRE team is responsible for keeping the production up and running. In the event of a bug or production failure, SRE teams can roll back to the previous stable version of a product so that Mean Time to Recovery (MTTR) is reduced.

The other problem that the SRE team is trying to solve is to reduce the Mean Time to Detect(MTTD) using the Canary Rollouts so that the new release is made available to a small group of users before doing full rollouts. Canary rollouts help the SRE team find the issues in the early stage with a limited number of affected users.

Automation is one of the biggest challenges the SRE team has to face. It is often observed that rollouts and supporting tasks are carried out manually, leading to inconsistency and increasing the probability of human error.

A good practice for managing the infrastructure is to use Infrastructure as Code (IaC) with the help of Terraform, Pulumi, and the automation tools such as Ansible, Puppet, Chef. SRE team can leverage those tools to solve the problem of automation.

The Core Development team can automate functional and non-functional testing in the test and stage environments but not in production.

Often reliability engineers have to take the on-call duties for managing unforeseen incidents, but they also have to prepare the documentation of the incidents and the troubleshooting steps so that it can help others perform the on-call duties.

The SRE team can build up a valuable knowledge base on incidents to improve the incident troubleshooting time.

Gaining exposure and building the knowledge base of the product development ecosystem (dev, test, stage, prod) is always beneficial for reliability engineers to foresee the issues in the production environment.

See our list of the most useful CI/CD tools that define the state of today’s software automation. And take a look at Spacelift, which is a sophisticated CI/CD platform for IaC that enables Gitops on infrastructure provisioning workflows. It provides a platform to manage IaC in an automated, easy, controlled, and secure manner. Spacelift goes above and beyond the support that is offered by the plain backend system.

While the two share some core values, the focus of their work is different – the application lifecycle through DevOps and operations lifecycle management through SRE. Nevertheless, they both connect the Development and Operation teams while sharing similar responsibilities. And they are both working towards the same goal – enhancing the release cycle and achieving better product reliability.

Rahul is a full-stack java developer working in product development and support of banking and financial applications. Focused on continuous delivery and automation. He is also Oracle Certified JAVA Professional. In his free time, Rahul maintains a blog at JHooq.